Considered as the "moment" that led to the band's rebirth, Your Favorite Enemies' members share about the emergency of living and the freedom that arises through the embodiment of letting go... "Where Did We Lose Each Other"...

The awakening, the inspiration, the rebirth in their own words. 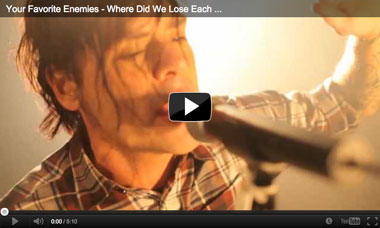 ”Where Did We Lose Each Other” has been a very impacting song for Your Favorite Enemies, it put words on a truth that they did not want to admit, but that allowed them to become who they are today, a song that marked the beginning of something new.

In this video, discover why the band members decided to do a special interview series, and discover the meaning the song carries for them, a little over a year after it has been recorded. A meaning they discovered more and more about as time passed. A treasure box that needed to be opened with all of you, a decision to share that song in its every detail with you, and a commitment towards themselves to look even further, knowing that this song has many layers that are yet to be revealed.