We’re back in Montreal since a few days now… And I must admit that it feels a little strange. It’s somewhat hard to believe that we are already back from tour. Those 2 weeks went by way too fast!!! Waking up this morning, it almost felt as if it was time to pack before leaving. But what we all lived and experienced is still so real and alive that we can’t deny it really happened. We have met old and new friends everywhere we went, shared unique moments that will forever live within us with each and everyone of you.

Thinking back about this whole tour, we realize just how crazy it’s been for real. Though blogs were posted almost every day, there are things you have never heard of.

All those times shared around a table in a hotel lobby (or around a bed when a certain lobby happened to close!), discussing about the show that was just finished, about the people we met and talked with, about the moments shared on stage and off stage…

Moose’s beautiful hair – No matter what country he is in, he pays a lot of attention to it, making sure it shines and smells good. And it did smell good, everywhere we went. The guy actually receives more comments on his hair than any of the girls on tour with him do… lol!

All the time we spent in the vans, driving from one city to another, meeting on our way heavy traffic jams in London and Paris – Berlin, we loved you for your empty streets! Matt and YB were the only 2 driving, and they did one hell of a job. Not only driving on the other side, but also driving the usual side with the wheel on the other side. Our days were very long ones, and driving after a gig was always longer than expected… Matt and his co-drivers discovered on tour their love for dance music – the only one that would keep them awake. Jeff and Ben probably have bruises all over from hitting each other to stay awake. They ate an unbelievable amount of food – it kept them awake, they said. As for the rest of us… We enjoyed a little bit of sleep… 😉

As you already know, the shows have been very intense emotionally. And one thing that came back was the energy that the guys displayed on stage. I will definitely not forget the last show in Paris, when we hung Alex’s t-shirt on a pole in the dressing room, to find out a few minutes after that it dripped on the couch that was under it… and in a major way, so much I thought we had dropped a bottle of water. Jeff’s cap was the same, so were his guitar straps, to YB’s dismay every time he had to tune one between songs… lol!

Oh… and how could we forget our encounter with Nick Cave?

And what about that last night we spent in Paris? The 11 of us gathered under the Eiffel Tower, and raised our glass to those 2 wonderful weeks – to the people we met and moments we shared. We did the same on our very last night in London, a few hours before leaving… When we shared once more about those beautiful moments with tears in our eyes… Tears that were turned into laughter as Jeff threw our plate of bread and cheese to the floor… 😉

However, our best memories are none of the places we visited… But the moments we crafted with you all. This is what truly made a difference to us. And these are the best souvenirs we’re bringing back with us. They will forever last, and have forever left a mark is us, individually and collectively.

I never thought such a huge family could be so close together. But this is real. This is true. And this is better than anything I could have dreamed of…

We had the last show of our European tour last night, in Paris. It was a little bit of a surprise show, as it’s been kept secret until a few days before the show itself… When our UK promo tour was made official, we knew we needed to go to France as well. And once didn’t seem to be enough for the band members, so when we had the opportunity to do another show in Paris, it didn’t take long before we said yes!

It was really emotional for us all to play again in Paris on this tour… We shared so many emotions with everyone during the first show, developed new relationships that we could only look forward to what was to happen… And it was the last show of a tour that went by way too quick!

We were all physically tired, though we were all in high spirits, and the band members all started getting sick – you should hear Alex’s voice today, it’s almost gone!!! But we were so excited about this show that tiredness and sickness didn’t really matter to anyone.

And it’s been an incredible show. It was true, it was real, and it was really emotional. Many had seen the first concert we did a few days before, many were seeing us perform for the very first time. And I think that what we all felt, from the band members on stage to the crowd on the floor, is indescribable. It’s truly been beyond words… And those moments shared with you all after the show all became truly precious memories for us all… On our way back to London, and today again when we all gathered together, it was you we were talking about. Not of the show itself. But you. And how much you all impacted and empowered us last night.

And we all promised ourselves one thing – it won’t take long before we are back.

We had our first day off of the tour today… I mean, a real one, without any rehearsal of any sort this time!

And as we were in Paris and that most of us had never seen the city before, we all decided it was time for us to play tourists a bit! It may seem weird because we travel all around the world on tour, but we usually don’t have time to visit much! I can only tell you that we were all excited and looking forward to it!

We started our trip with Le Cimetière Père-Lachaise. We did a much obliged stop at Jim Morrison’s grave, but also walked around to see Balzac’s and Molière’s – two writers Alex loves very much. And we got kicked out. It was late, closing time was coming by, and the security guard wasn’t exactly too keen about having visitors in the cemetery at that time. One “parisian” discussion later, we walked away… lol!

We then headed to Montmartre, where we walked around the very tiny streets lined with shops and bistrots. Wonderful sights, a truly wonderful place!!! Then we followed by the Quartier Latin. We had a few stops in mind, but did very little of them. First one was the bookstore Shakespeare and Company. A wonderful place, really. You do feel like you are brought back somewhere else in time and place. It doesn’t feel like Paris. It doesn’t feel like today. It’s suddenly only you and the words. The place used to be very popular amongst the Beat Poets, who Alex really loves. We then went on to see the restaurant Polidor, and walked a little around the neighborhood before going back to our hotel… 🙂

A wonderful day… Filled with simple moments and laughter… A perfect day, for whatever it means 🙂 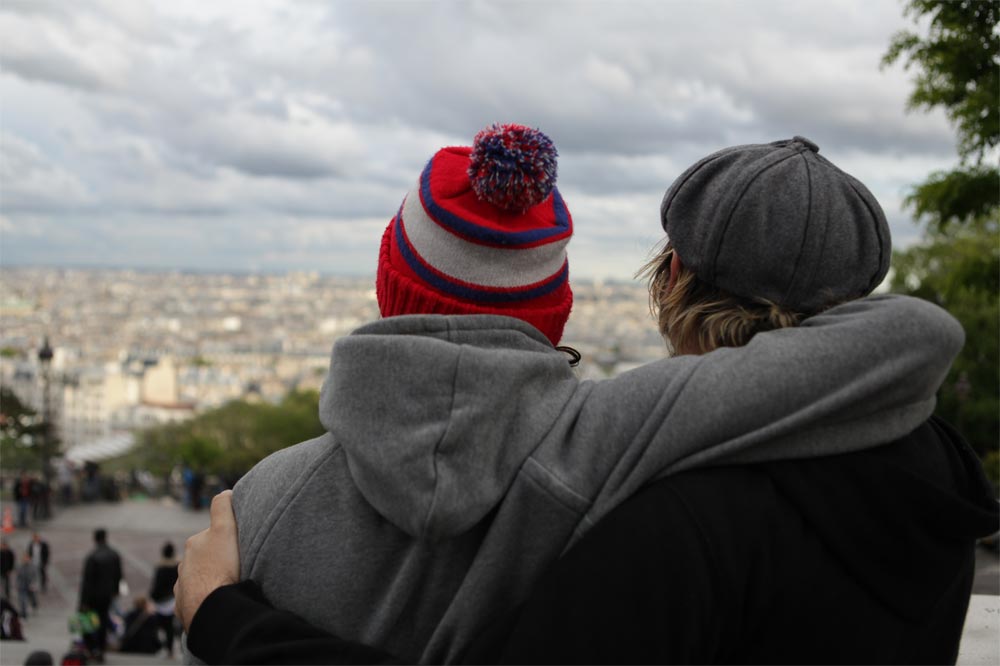 Today was our show at the Magnet Club… When planning their UK Promo tour, it was essential for the band members to go back to two other places, turning the UK promo tour into a European promo tour! Paris and Berlin were those 2 places. We just couldn’t go back to Europe without going back to those 2 cities…

From the stage to the floor, what happened was truly incredible. People singing… people dancing… people headbanging… We all lived the music in a different way, but we were all together. No matter how different we were from one another, there was an undeniable communion going on… that ended in the crowd once more! I guess they just can’t help it – the band members got to be as close to you as they can… lol!!! Tonight was simply that; communion. And it’s been wonderful!

I’ll let the pictures speak for themselves… 🙂

Your Favorite Enemies’ came back to Paris after almost 6 years… Not only did they give a mind-blowing performance, but they also have a very special surprise for all of you!!!! They will be back in Paris on May 29th, at 8:00pm for another show!!!!! The venue is called “Le Sentier des Halles”… Even better? The show is FREE!!!!! You’re not dreaming… It’s really happening!!! Will you be there??? Let us know!!! 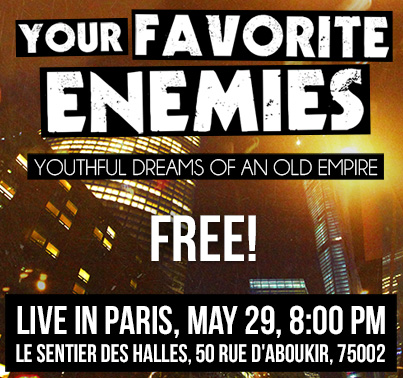