I pushed the writing of this blog back and back and back again. And I tried and I tried and I tried writing something about it… But being so new, so fresh and so real, I guess it is still hard for me to put words on it… The only thing I know for sure right now is that there couldn’t be any better way to finish the album “Vague Souvenir”… By its lyrics and its music, it is as much a conclusion to a chapter in a specific journey, as well as the beginning of another one, and yet it is only another step in one lifelong journey…

And what I want for you is to be able to fully grasp the lyrics of this wonderful poetry, that you can see translated in English below…

—————
Gravitation Of The Hearts

We often look, through the relics of our reminiscent souvenir, for diffuse sparks of colors and blurred leaks of light that would allow us to revive our faith in the nature of our dreams, lost in between the felted illusions of our irresolute past and darkened by the posthumous shadows of our affective denial. Giving birth to the most treacherous languor that is nostalgia, we quench ourselves to the dregs of this evasion that, unable to make free, has the ability of altering what was… However, it was nothing more than withered memories and irresolute impressions.

As we die from the desire of reliving some moments that were taken away, of seeing once more some faces that disappeared, of taking back words thrown without a warning or whispered half-heartedly, we condemn our vermilion passion to be only wallpapers with soulless and flavorless patterns, where longings are nothing but the eroded desires of stoic emotions, missed opportunities and failed promises.

To these people we secretly loved, to the courage we lacked when time came to tell them, to these mornings we allowed to fade too fast, to these embraces we thought eternal but only were in passing, to the fooleries made into greek tragedies, to this first love we dwell on and play in a loop… what is left, be it numerous regrets, where the gravitation of the hearts, with its sleepless nights and its soul’s vertigo, preferring illusory chimeras over the idea of letting go of this time which, for numerous reasons, does not belong to us anymore, has it never truly did…

Letting go… far from the inextricable utopia wanting that we surrender, renounce, deny or even erase traces of what gave birth to who we are, vapor of time and fragile dust. Letting go, an invitation to live without restraints, where giving up does not mean surrendering, where abandoning does not say abdicating, where kneeling does not intend bringing to heels, nor does living the present mean denying the past, that forgiving a fault implies refuting the sufferings it caused. Once we let go of everything we’ve allowed to rob ourselves, only then can birth the plenitude of living to the fullest. It is then that the exultation of the moment can honestly describe the ceremony and jubilation that is living his own life.

And “Vague Souvenir” proves to be this voyage, at the end of the night for some, and far beyond dawn for others. Where, leaving behind what cannot be changed or sometimes even forgiven, we take a chance at living, imperfect, but free nonetheless, thus giving birth to a new step in this journey that, for the first time maybe, will be without any filters, truly ours… somewhere, “Between Illness And Migration”. 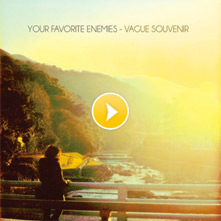 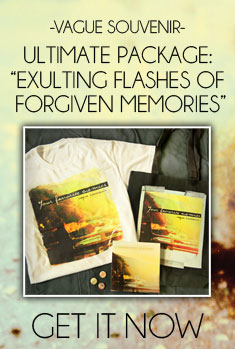