Tonight in Saint-Ouen took place a concert that had been long awaited by a small mass of people. Indeed, the crowd tonight welcomed Your Favorite Enemies for their return in France, after 6 years of absence. You know, that band that participated to the original soundtrack of Final Fantasy (Dissidia), and who released the single “Open Your Eyes”? Still, the few Parisians who follow the band were there that night, thus properly honoring an astonishing band that surprised me a lot…

Finally, time for the eagerly awaited French Canadians to get on stage! This concert would have been an opportunity for some to discover a few tracks from the album “Between Illness And Migration”, now only released in Japan but that should hit the stores in France this fall. Only a few nasty internet users who had downloaded the leaked album or the courageous ones who weren’t afraid of the shipping and handling fees were aware of the dazzling contents of this album. An album that marks a drastic change from their previous EPs, change that had already been initiated by Vague Souvenir. Furthermore, the contents of the album literally explode when played live…

One of the band’s strong point is, first of all, its proximity with its public. A bond that reinforces the relationship between the musicians and their fans, their ability to communicate to every spectator the complete emotional charge that comes from their songs and their happiness of being on stage.They will make a point to prove it to us tonight with breathtaking and moving set. The first song played tonight, “Satsuki Yami”, is the introduction to the new album. Heavy and ambient on CD, it comes off different and completely out of control when live, with raging guitars. Something to prepare us for what was awaiting us tonight. The second song, “Empire Of Sorrows”, is the one that really introduced the french public to the universe of the new album. And what a knock out… The song is introduced with spoken words that are not without recalling Jordan Dreyer (La Dispute), but that said, in a lower tone. The band is overflowing with energy and the frontman without a doubt possesses a charisma that captivated the venue. His singing is as good as in studio, and not only… His spoken words are chanted in a much more aggressive way, his singing sometimes turns into screams (it reminded me of Bart from Birds In Row, when he pushed his voice to the limit), and thus the magic operated on its own, everybody was under the charm. It’s songs along the same line that we will discover throughout the concert, oscillating between a soaring alternative rock, with post-punk passages, sounding tears of shoegaze, and an eternal emo feeling that sticks to the band since its beginnings. You only need to listen to “Where Did We Lose Each Other” to be convinced, the following song performed tonight, that sounds like Thrice, especially during the chorus.

The band will not forget to play a few of the hits from their previous EPs (“Open Your Eyes”, “Little Sister”, “Midnight’s Crashing”), when they still sounded like Senses Fail or Thursday, which aroused an intense joy amongst the public, with screams to support. A crowd for which the band will perform the cover of the song “Des Armes” from Noir Désir, that appears on Vague Souvenir, an album essentially made of cover songs. A cover which intensity had been doubled, notably because of Alex’s emotional and untiring singing, often times “borderline”. The band, faithful to itself, proved being very communicative with the fans, and this until the very end of the show when, in the middle of a song, the band members brought the drum set piece by piece in the middle of the crowd, offering to some of the fans to play on it (including myself, I have even lost the use of one of my finger for one full day), where guitarists and bassist played in unison in the pit, for the utmost happiness of the fans, whose eyes were glistening for the most of them, and literally blowing them away after a dazzling hour of powerful sounds, emotional and atmospherical. But no, it wasn’t the end yet. Ben and Alex played us 3 acoustic songs that enchanted the audience, slowly spoiling us, in this still omnipresent intimacy.

Out of all the concerts I lived up to this day, this one has truly been one of the most beautiful I’ve attended. An intensity and an involvement in their music that is rare, a true and sincere human warmth, a show that is musically perfect. In addition, we rediscover their songs once more, performed with even more power and heaviness. This band really deserves to be looked into, overflowing with passion, sincerity and who, despite success, multiple rewards and tours, stay forever close to their audience, happy as kids from every little positive reaction from the public or of one single fan. Here’s to the next one!

A big thank you to Juliette from YFE France! 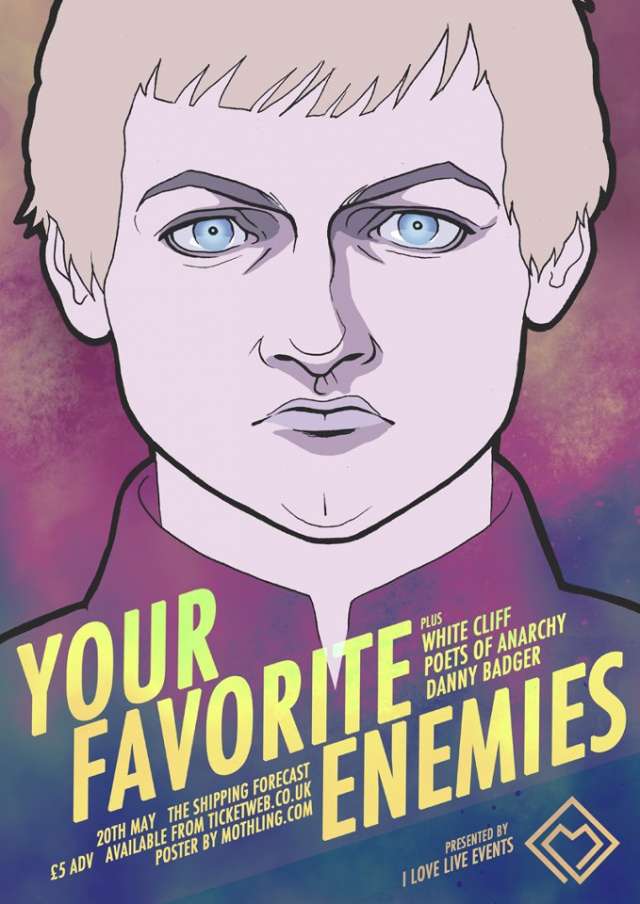 After this it was time for  Canadian beards and back tickling barnets. I didn’t recognise this band as on their videos they seem pretty clean cut, but they are quite the opposite now, it was time for Your Favorite Enemies. The 6 piece squeezed themselves on to this small stage, the drummer must have forgotten his t-shirt as he was exposing his Bull tattoo across the entire front of his body. The first song started with roaring tom hits with the singer chanting “I grew up in a storm.” The guitarist on the floor messing about with his effect pedals creating spine tingling effects. The two guitarist had some brilliant interlinking guitar lines which were extremely enjoyable to listen to.  A thing that annoyed me a bit wasn’t the band at all it was their 3 man (and woman) strong  ‘entourage’ blocking the front of the stage for pretty much the duration of the gig, standing with their cameras wedged in the bands faces.

Their massive sound bellowed into  crevice of The Hold. The singer quipped “We are from Montreal, Canada. We bring a bit of Canadian French, hair and beards and a lot of noise!” I think he hit the nail on the head. He has a fantastic voice which really was enforced by the massive sound created by the band behind him. Every member seemed really up for the gig and it was joy to behold. More cameras seemed to wangle their way in front of the stage to block the view of the audience as the set went on. The singer on their last song managed to find his way through them to serenade an unsuspecting young girl in the crowd who seemed to be extremely happy about the situation. He marched back on to the stage as the band walloped the audience with an atmospheric sign off. They received an enormous cheer as they walked off stage and deservedly so!